Just the mention of the call sign G5UM or the name 'Uncle Mike' immediately brings the name of Jack Hum into the conversation. He was recognised as a man full of drive and energy who pioneered and popularised the VHF and UHF Bands in United Kingdom, everybody seemed to know Jack wherever you went.

Jack Hum, the father of amateur radio in Leicestershire, died at his home on January 11th, 1995. He was 84 years old and his passing will he mourned by the whole of the Amateur Radio movement. 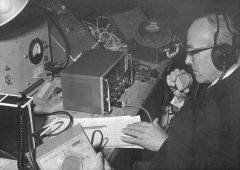 He was licensed in October 1927, a few days before his seventeenth birthday (and his Dad had to pay the bill because he was still a minor). Jack waited in eager trepidation for the arrival of the new callsign. He guessed it might be 5JH, knowing this callsign had not been allocated and also knowing the license authority of the day had a penchant for issuing self-evident callsigns. He never expected to receive 5UM: that callsign, he thought, belonged to a chap in East London. What he did not know was that this man had given up when the spark went out. So JH received a callsign only one dot more than his surname in the Morse code, without even asking.

Note no "G" prefix. You needed a special dispensation from those on high if you proposed to work stations outside of these islands, and that didn't come until later where 5UM was concerned. His earliest years were devoted to 160 metres simply because that was the easiest and cheapest band on which to get started. Operation was mainly on c.w., because modulation techniques of the day were rudimentary involving placing a carbon microphone in the earth lead, and r.f. burns to the lips were not unknown.

The first introductions to "the very highs" came via the rushbox mode of self-excited oscillator, again modulated by the carbon mike, and super-regenerative receiver. The bandwidth of both devices was indeterminate and really didn't matter in those days of 56MC/s (before Megahertz's came in). Ranges were short, performance minimal, but you made it yourself, including the aerial and it was all great fun.

Then came the war and Jack served in the Royal Air Force on communications, rising in rank to a Squadron Leader on Coastal Command duties.

After the great resumption of amateur radio in 1945, rigs had to be stable and crystal controlled. The few dozen people you heard on the then 58 - 60 MHz bands could immediately be identified by the crystal frequencies they used: you didn't need to wait for their callsigns.

"Uncle Mike" recalled that it was a great moment when he achieved his first ever QSO on 2m. The receiver was a TRF. The transmitter had just been completed and the output coil was thrust into the tank inductor and held there while a CQ was pounded out. No wonder G5MA at the other end reported QSB: it was Jack's hand shaking with excitement as he held the antenna coil lethally against the tank coil.

In 1952 G5UM was elected to the RSGB Council in an office (long since abolished) called Hon. Editor. In the company of others, notably the late G2UJ, he attempted to install some recognition of the "very highs" into the then hierarchy of the national society. Thus was born the VHF National. Field Day, the new VHF Committee, and the concept of amateur band beacons to provide indications of conditions.

After eight years on the RSGB Council, Jack stepped down at the end of 1959 and looked forward to a few years of freedom to get on with a bit more constructional work. However, this was a short-lived hope: in 1966 he was invited to take over the MetreWave Column in the national society's journal, and this he wrote until he was compelled for health reasons to relinquish in 1975. He gave up the secretaryship of VHF/UHF Awards Manager, which was passed on to him by G3GMY in 1966.

Another significant and fascinating development, which involved the society's VHF committee in the early Seventies, was to get the repeater concept "off the ground." Tentative at first, with just the one GB3PI repeater at Cambridge, the repeater movement now covers the UK, It was, Jack exclaimed at the time, the biggest collective movement and the Leicestershire Repeater Group represents one of its most shining examples.

It was in 1966 when Jack left Murphy Radio headquarters and came to Leicester to join Rank Taylor Hobson as their Technical Journalist. He and his wife Grace wisely chose a house on the highest and best VHF location in the county at Houghton-on-the-hill.

In 1974 G5UM was one of three members to be presented with Vice Presidents' badges at the RSGB Annual General Meeting of that year. This was for services rendered to VHF.

Many people have described Jack Hum as the "great gentleman of the airwaves" and he was too and nobody will ever take his place. The standards he set us will be forever remembered by the amateurs who knew him. He was at his happiest when he was in the company of amateurs or in a net on six metres, four metres, two metres or seventy centimetres.

On the day he died his logbook was open on his operating table, meticulously made up, with the last contact dated the day before.

Jack kept detailed records of all his contacts, including hand-written textbooks listing all the owners of pre-war callsigns, something the RSGB Library had been searching for. Over five thousand callsigns with names and addresses were listed. After his death these records were put on a computer disk and are now known as the 'Jack Hum Call book'.